Creating value for shareholders is a never-ending exercise for executives and finding the right opportunities in today’s economic environment leaves little room for mistakes. From the wide range of potential strategic initiatives to increase an investor’s wealth, M&A activities remain popular strategic options for executives, who see them as an effective way to build bigger, more profitable, more competitive and more diversified businesses.

A management team may be looking into an acquisition for many reasons, but it is widely accepted that strategic buyers expect a certain amount of synergies from integrating a target’s activities into their own. However, knowing that 70% to 90% of M&A projects fail to deliver the expected benefits initially identified1, are management teams measuring potential value creation the right way?

It is tempting to point the finger at bad post-merger integration processes or other external factors, but our experience shows that many deals would have had a higher success rate by adopting a holistic approach at the synergy valuation stage, combining both economic and financial analysis.


We can establish the theoretical added value of an M&A project for shareholders as the difference between the actual price paid for an acquisition and the estimated maximum deal value as shown below.

Putting aside the benefit of controlling the new integrated entity, the estimation of the net present value (NPV) of synergies can significantly influence the perceived added value created in a deal.

When using either a DCF or an EBITDA multiple to determine the NPV of synergies, the following four factors will have an impact on the valuation:

Every business is unique so it is nearly impossible to develop a standardised approach to this exercise, but having a structured methodology could help avoid costly mistakes. What follows is a brief introduction to synergy valuation topics. It should not be thought of as an exhaustive approach, but as a focus on certain concepts and issues that management teams may face when valuing the financial considerations of an M&A deal. 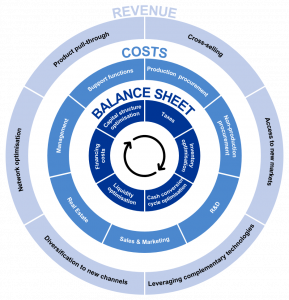 Synergies are expected to arise from different sources depending on the sector. Globally, our experience working on M&A projects shows that the publicly communicated run-rate EBIT synergies stand at 1% to 5% of combined sales.

Revenue synergies are more complicated to benchmark against comparable transactions since the benchmarking exercise requires a detailed analysis of the target’s product specificities. It could also be substantially affected by the chosen product integration strategy.

Benchmarking cost synergies against similar deals is more reliable. By way of example, we regularly observe supply chain and procurement savings of 2% to 4% of the combined procurement cost base in the merger of similarly sized industrial or manufacturing players. We also regularly see 10% to 20% savings on real estate costs, depending on the overlap of the geographical footprint. More generally, players in these industries can expect a split of run-rate cost synergies as shown in the following chart. 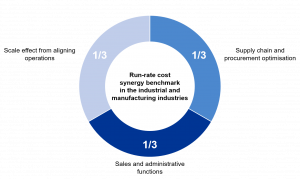 The following two assessments will have a significant impact on the entire synergy quantification process:

– Product & service offerings matrix: Are the offering propositions of the two companies (i) complementary, (ii) directly competing or (iii) overlapping on the value chain?

– Integration strategy for the target: Is the target’s product portfolio going to be (i) integrated into the existing brands or (ii) kept as a distinct offering?

Two overlapping offerings will yield two different synergy assessments depending on the product integration strategy. For example, technology & software companies frequently face this dilemma when dealing with two successful stand-alone solutions after an acquisition. Killing one product might lead to significant commercial and R&D cost savings, but it could potentially lead to negative top line synergies from adverse customer conversion to the surviving product.

Good practice would be to perform distinct analyses for each integration scenario to have clear visibility on which one will maximize value creation.

4. BEYOND THE FINANCIAL STATEMENTS

M&A activities can have a significant impact on the competitive landscape of the industry, and these effects should be integrated into the financial and valuation models. The current economic environment and the stage of the economic cycle will also affect growth expectations and strategic developments and should therefore feed into synergy assessment and valuation.

For example, in a consolidating sector where there is significant value to scale, it could make sense for a player to acquire what initially appears to be an overpriced target to keep its current competitive advantages. Not pursuing this deal may lead to a loss in pricing power against its main competitors or the ability to scale cost reductions, for example. In this situation, it is important to consider this potential loss of competitive advantage in the synergy analysis. A deal might not generate any additional value at the current price, but not making it might ultimately lead to value deterioration.

Another example would be an equipment manufacturer in the oil & gas industry that considers a very promising and synergistic acquisition. By financing the acquisition with debt to capitalise on low borrowing fees and opportunities to optimise capital structure, the company might have serious short-term liquidity issues as current economic indicators exhibit a downward trend and show a potential economic slowdown in oil & gas equipment in the near term.

Good practice looks beyond the base case scenario or the current business plan assumptions and does not assess synergies purely based on the current economic environment.


The following is a non-exhaustive list of attention points that we usually focus on when dealing with synergies.

Revenue synergies can be difficult to estimate for many reasons such as specific product or technological complexities. This uncertainty can lead executives and investors to discard synergies from the final assessment, which can lead to huge opportunity cost mistakes.

Involving operational and technical experts is a good way to increase the credibility of the revenue synergy exercise. Assigning proper contingency reserves is also a good way to avoid missing any potential upside value, especially when comparing multiple targets and projects.

A common practice is to assume that the current fixed cost structure will absorb the additional revenue generated from top line synergies by using a higher operating profit margin.


Restructuring initiatives can be negatively perceived internally and under certain circumstances are difficult to realise. An acquisition can be a good opportunity to create synergies and optimise the cost structure.

If the restructuring plan can be implemented outside of the acquisition process, it should not be considered in the value creation analysis.

Many synergy assessments depend on financial and accounting reporting, especially when considering the cost structure.

However, businesses usually report costs differently, even when they are in the same sector. For example, R&D costs for one company can fall under SG&A costs or COGS, or they can capitalised on the balance sheet, whereas another company might allocate them entirely to SG&A.

Some synergies do not last

A common practice is to calculate a run-rate synergy level and assume that it will continue unchanged in the long run.

Whilst this is mostly true for cost synergies, revenue synergies will most likely face pressure at some point in the future. For example, an increase in pricing power due to an increase in market share will eventually fade away as the sector further consolidates. Care should be taken when using EBITDA multiples to value synergies.


Acquiring another company will likely change the market outlook and future expected growth of the new company by obtaining a new technology or gaining access to new markets, for example.

The change in the future growth prospects of the combined entity should be reflected in the DCF or EBITDA multiple analyses to value synergies.

Potential change in the cost of capital


An acquisition triggering a change in economic activities and global industry exposure will most likely distort the acquiring company’s cost of capital.

Synergy valuation should be based on the new combined entity’s cost of capital, and not solely on that of the acquirer preceding the transaction. Financial expenses should also be considered, if additional debt is raised to counter the acquisition’s impact on the capital structure.

An important step is to understand the financial cost structure and geographical footprint for both the acquiring company and the target. This involves gathering detailed financial and operational data such as distribution channels, plant and office locations with their respective characteristics (headcount, fixed costs, capacity), recurring revenue patterns, client concentration, etc.

It certainly is complicated to gather reliable data for the target, but it is surprising how complicated it can be for the acquiring company to access its own data. Only a limited number of people can be made aware of the potential deal for confidentiality purposes, so striking the right balance between strategically disclosing information to staff and formulating risk-adjusted assumptions becomes a challenge.

A widely implemented solution is to disclose information internally to a number of trusted employees who have been with the company for many years, all whilst working with a third-party ‘clean team’ that can assess confidential information for both parties, reducing the risks related to early M&A discussions.

It is unreasonable to think that every identified synergy will materialise as estimated. Good practice would be to perform a probability analysis on each of the material assumptions used. The aggregate value should constitute a contingency reserve to be removed from potential M&A value creation to protect against any negative deviations from the targeted synergies.

The calculation of the contingency reserve remains a probabilistic exercise, but it is important when comparing multiple potential deals simultaneously.

Determining the price to pay for an acquisition will significantly affect the potential return on the deal as well as shareholders’ value. Knowing that synergies are an important part of this valuation, a structured financial and economic approach to synergy assessment is an essential first step to M&A success. 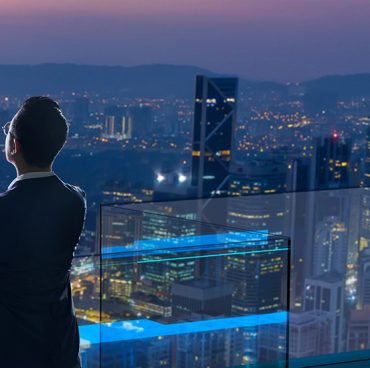 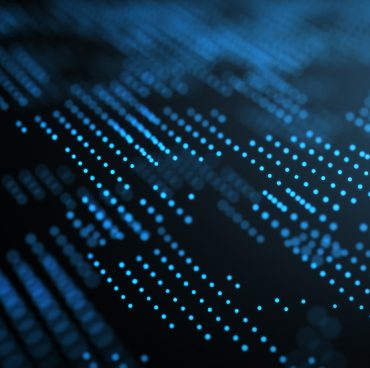