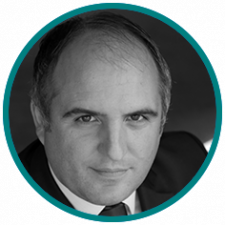 For years now, we have witnessed complex and often senseless debates on property prices in Paris. The clichés are legion, and expert debates most often end in chaos. Ultimately, estate agents, notaries and bankers are hauled over the coals.

Essentially, there are two conflicting viewpoints:

1. Paris is unique; Paris is a niche market; Paris is magical.

2. This growth cannot last forever; the bubble is at bursting point and the aftermath will be tough.

In short, the value of the Parisian square metre grew on average 2.6 times more quickly than consumer prices as estimated by Insee.

We can identify two phases:

In this later period, the disparity between property price and the average increase in standard of living warrants further investigation.

2. IS IT DUE TO INCREASING DEMAND?

Many defend the following theory: demand for Paris is growing, whilst supply is limited.

Demographic pressure, however, is much more prevalent in the rest of the Ile-de-France region (excluding Paris), with the population growing from 8.4 million to 10.1 million inhabitants between 1990 and 2018 (+0.6% per annum).

We can conclude that demographic pressure in Paris has remained constant or has grown, if we include the inner suburbs. This enables us to rationalise prices per m2 remaining stable at a high market level2. However, it in no way rationalises the major growth dynamics witnessed for actual property prices in Paris.

3. IS IT DUE TO DECREASING SUPPLY?

It seems high time to put an end to the common misconception: a fall in the volume of properties for sale does not automatically increase prices, as some property professionals would have you believe.

The economic reality is different: when prices are high, property owners are more inclined to sell their property, either to crystallise a capital gain or to undertake a buy–sell transaction (incidentally, often in the reverse order) because they have confidence in the market.

Conversely, when prices are shrinking, the market seizes up and property owners delay their potential sales waiting for better days.

The conclusion is striking: the classic economic mechanisms of supply and demand simply cannot explain the historical growth in residential property prices per m2 in Paris.

4. WHAT ARE THE REAL DRIVERS EXPLAINING THE INCREASE IN RESIDENTIAL PROPERTY PRICES PER M² IN PARIS?

As we cannot use demography and standard economics to explain the increase in prices observed, what are the variables that really can explain this sharp increase?

To answer this question, we have built a multi-variable regression model using a long historical series (1990–2017) which comes to the following conclusion.

Since 1990, the development of residential property prices per m2 in Paris can be explained ‘entirely’ and ‘mathematically’ by two financial variables.

To put it simply, this means that it is possible to explain – and potentially predict – the price per m2 of residential property in Paris with an extremely high degree of accuracy using only two financial variables.

– For those familiar with such techniques, our multi-variable regression model reached a correlation index (R2) level of 93%3.

The first variable involved is the following:

– Taken in isolation, this variable explains the price per m2 with an R2 of 73%.

In simple terms, it represents a borrower’s interest rate adjusted for economic inflation. It verges on the notion of the actual net interest rate for the borrower.

In 2017–2018, it is interesting to note the scissor effect between the French 10-year OAT rate and inflation. In this period, interest rates remained at their floor. Based only on these gross rates, property prices should not have increased because of this variable (cf. appendix 1).

However, in parallel, inflation picked up significantly in 2018 thus reducing the spread. In concrete terms, the actual net borrowing rate reduced further, relative to inflation. For the first time, the spread (10-year OAT – inflation) became negative, meaning that for the first time, individual borrowers could borrow at actual negative net rates: their mortgage rate would be lower than inflation.

This scissor effect explains the continued increase in residential property prices per m2 in Paris in 2018 (2018 forecasts: growth in price per m2 of approximately 8% in Paris). 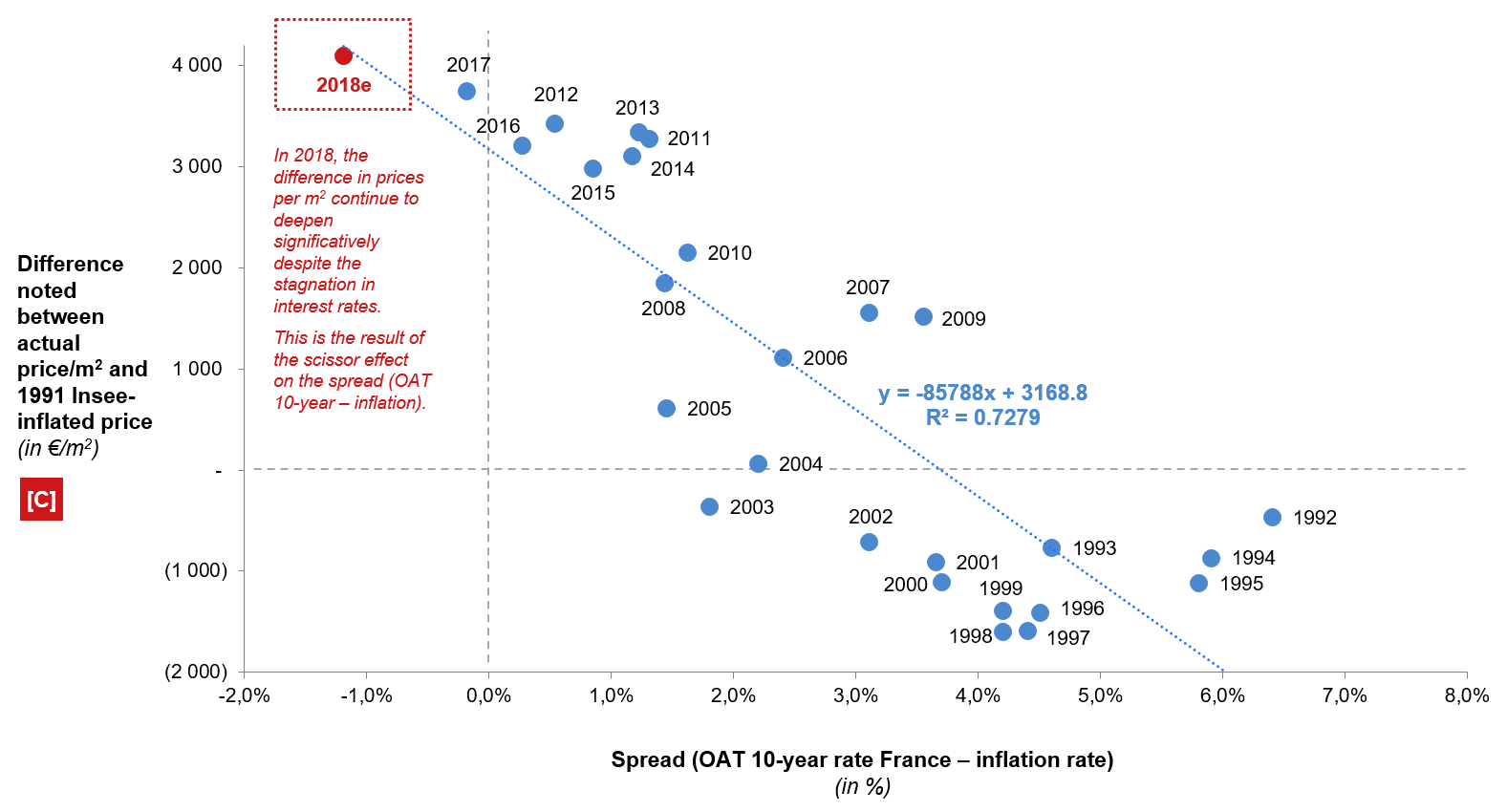 This fall in spread, however, is not the only or even the best driver explaining the increase in prices per m2 in Paris.

The second variable is the following:

– Taken in isolation, this variable explains the price per m2 with an R2 of approximately 92%. It is itself significantly correlated with the first variable, owing to the coordination of decisions on the development of the ECB’s monetary policy for these two variables.

The impact of this variable highlights the major impact on the valuation of financial asset classes – including Parisian property – of the quantitative easing policy fervently implemented by the ECB for several years.

Currently, the main driver of the increase in residential property prices in Paris is the ease of obtaining credit, that is, the ECB’s provision of a growing money supply to banks – coupled with falling and subsequently low rates.

Since the 2009 crisis, the size of the ECB’s balance sheet has developed as follows: 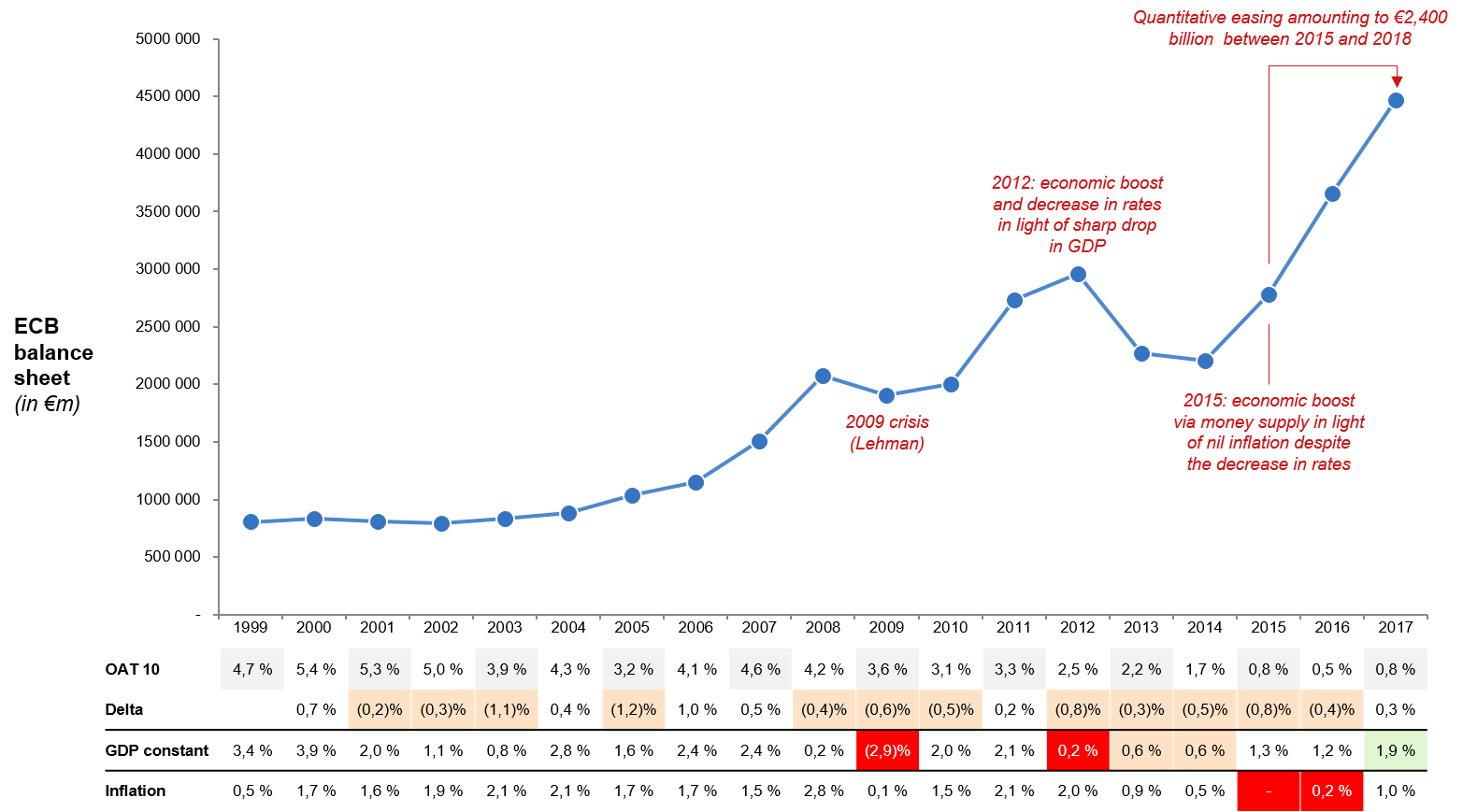 The impact on prices per m2 has been direct. Since 1999, it is possible to obtain a 92% correlation between prices per m2 in Paris and this second variable alone (cf. appendix 2).

Note that this correlation also implicitly integrates the fact that the rate spread has fallen.

Indeed, the ECB’s monetary policy can be summarised as adjusting the level of reference rates and the size of its balance sheet jointly with the aim of relaunching economic growth all while maintaining inflation below the fateful threshold of 2%.

We have said it all!

The ECB’s monetary policy explains ‘entirely’ and ‘mathematically’ the development of prices per m2 in Paris (with three strings constituting our two variables: rates, inflation and money supply). The price per m2 of residential property in Paris is no different from the index of a purely financial asset driven by these variables.

It is possible to predict future developments in prices per m2 in Paris using a mathematical formula and an extremely high relevance. To do this, we have to listen to the European Central Bank and anticipate and model its decisions.

This model will be solid and valid for as long as the ECB controls the banking environment in Europe and macroeconomic indicators are ‘conventional’.

In the short term, the latest releases from the ECB provide the following guidance: stabilisation of its balance sheet and the first increase in reference rates forecast for the beginning of H2 2019. An adjustment to be anticipated.

In the case of a major financial shock, the story will be very different but also able to be modelled with a high degree of precision.

The in-depth combination of economic and financial expertise allows us to obtain better conclusions than market consensus and enables us to build powerful, differentiating tools for forecasting and modelling.

To be limited to consensus and go without such precise tools is not something worth considering for a sophisticated investor.

Appendix 1:
Development of interest rates (10-year OAT), inflation and their spread in France since 1991 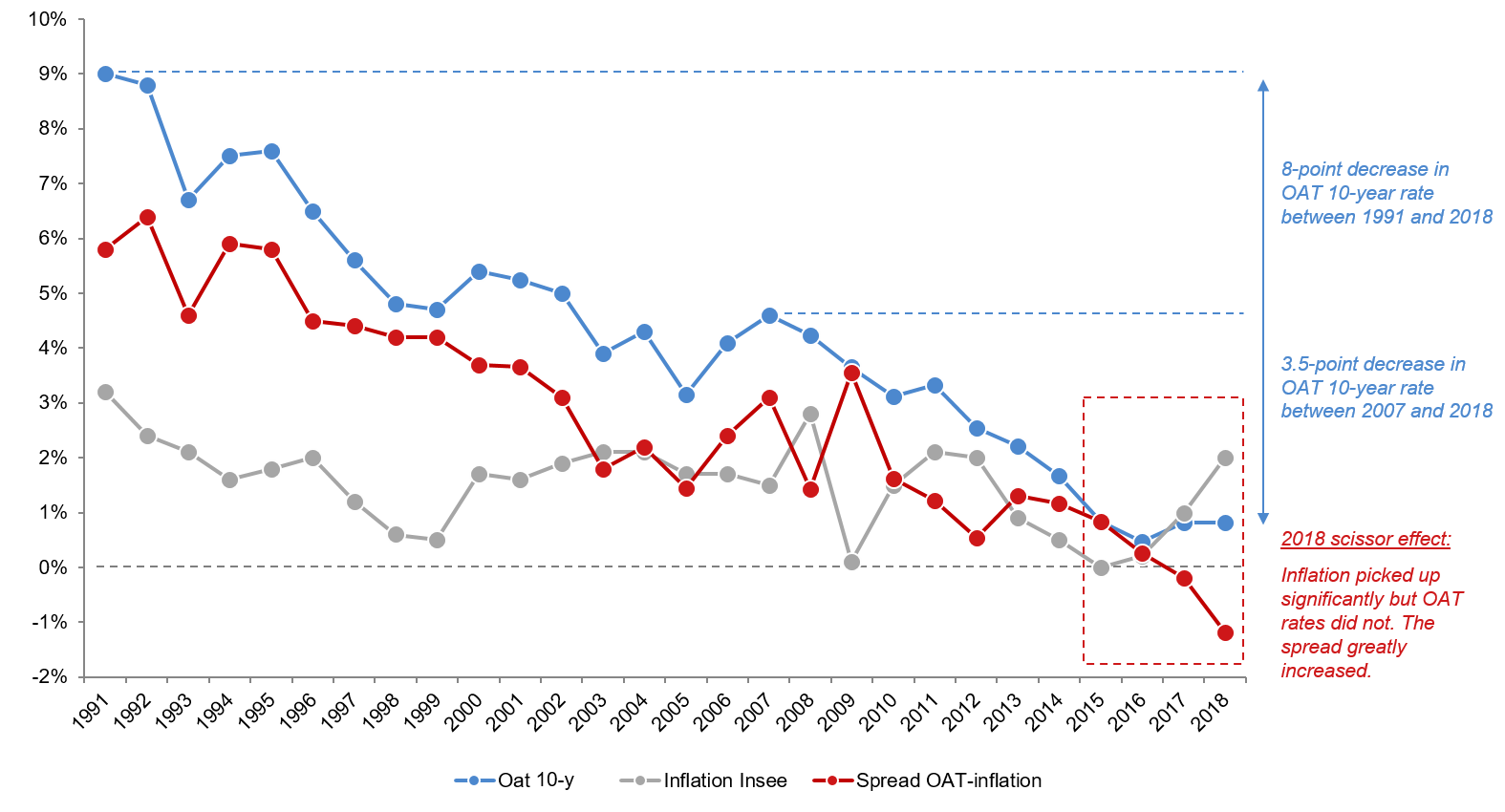 Appendix 2:
Development of the size of the ECB’s balance sheet versus prices per m² in Paris 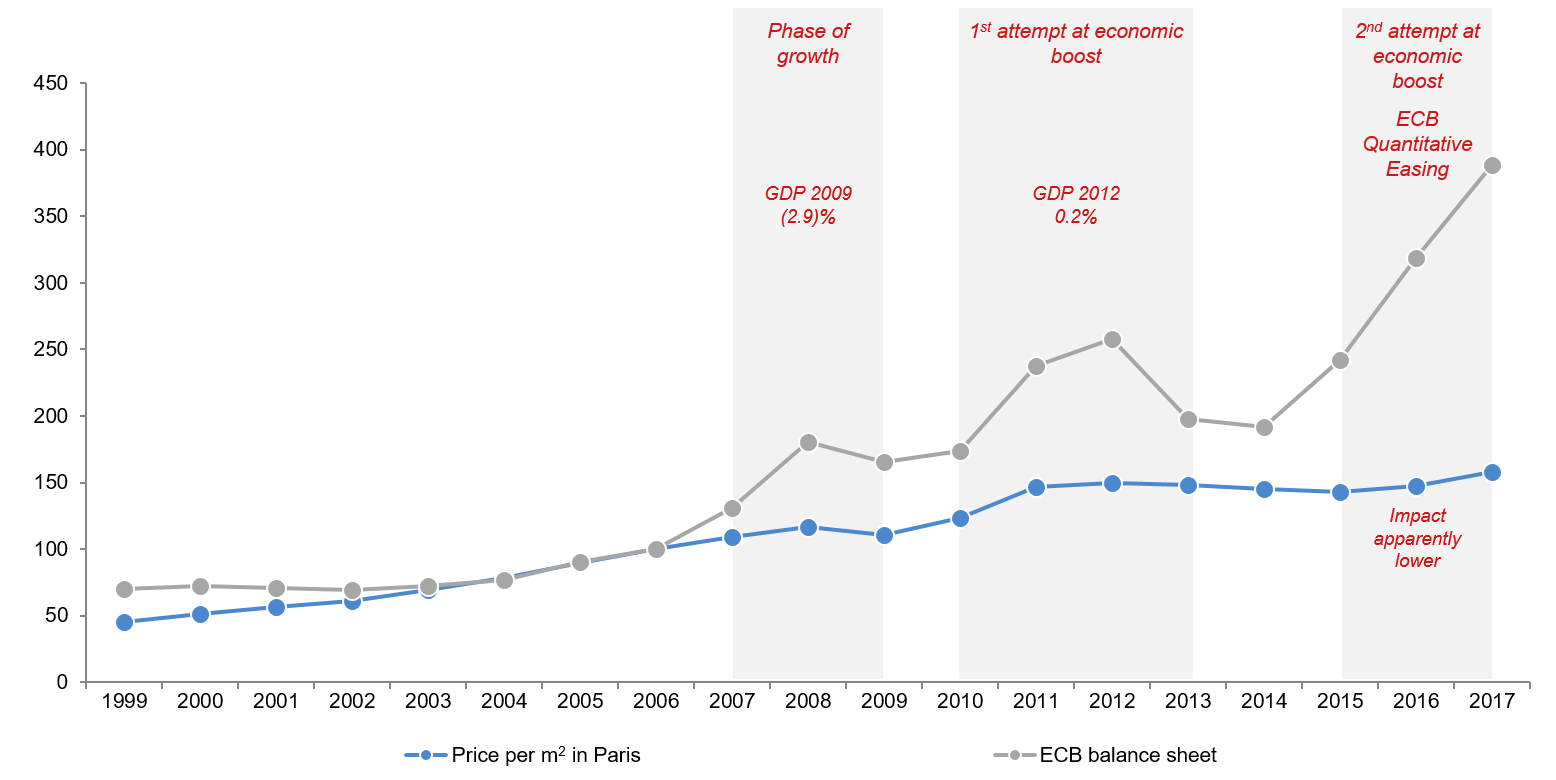 1 Note that 1991 was, at the time, a peak year in the cycle closing out the upswing period in Paris property speculation.

2 Or, at best, exhibiting a level of intermediate growth. 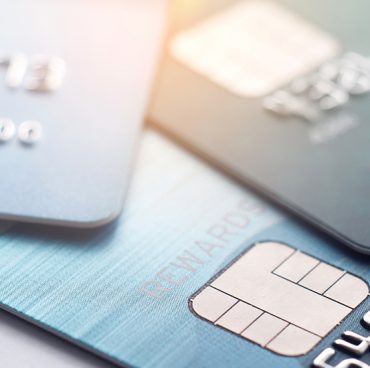 1. Digital transformation in retail banking Over the past few years, the banking industry has witnes... 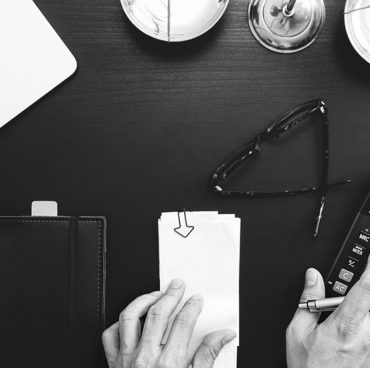 For lawyers involved in the world of litigation and arbitration, claims for damages of all kinds are...